The Navarra Riding Games seek the promotion of the sport among people with intellectual impairment, with the participation of different nation wide clubs. This year, 10 clubs attended the meeting celebrated during the months of March, April, May, June, September and October at different locations in Navarra.

Riding-practice lessons were conducted four days a week, 2 hours each, in groups of 8-10 participants, which meant a total 8 hours per person and group. The last hour or the course was dedicated to an assessment, used as the Navarra Championship of the discipline.

As a whole, 260 participants took part in the games.

On more time, Fundación para la Promoción del Deporte Ecuestre sponsors this Navarra Riding Games, already established as a nation wide reference because of their sportive qualities and the benefits participants receive at a personal level. 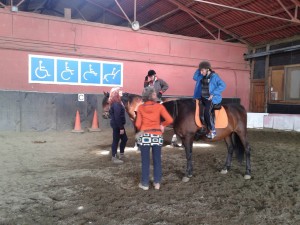