Hippotherapy for the deaf and blind – ONCE and Caballo Amigo

In the month of June ended the program «The Horse as a therapeutic resource in the education of children with visual impairments and deaf-blindness.» These therapies were conducted by the Caballo Amigo Foundation of Madrid, in collaboration with the ONCE and the Foundation for the Promotion of Equestrian Sports, being the fifth edition in which this last mentioned shows its support to the project. 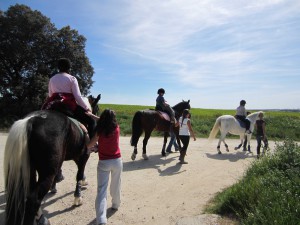 The beneficiaries of this project were 8 students from the Antonio Vicente Mosquete Denter, which is one out of the five Educational Resource Centers (CRE), that the ONCE has in Spain.
The purpose was to promote the independence of people with sensory disabilities in daily life activities, and thus ensure a better life quality for them. 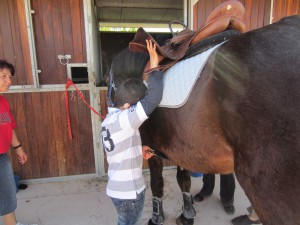 The therapies focused on these 3 fundamental pillars to achieve such autonomy:
Position in space. Reference of the guys at the equestrian center, the planned objective was for them to identify the main areas (ramps, dressing rooms, saddlery and stable area) and so they could move with some confidence.
Horse care. The work consisted on them being able to put the halter on and to tie the horse in order to proceed with the brushing and cleaning of the hooves; such things gives them greater autonomy at the equestrian center and therefore in their daily lives. Through the animal care process, they also worked on discovering the horse´s size, shape, and the situation regarding the horse, to minimize the maximum risks of a stomp or a kick, etc. They also learned to distinguish the most important parts of the horse: head, back, rump, etc.
Horse riding. At firsts the goal was to improve the psychomotor status of the riders / amazons, since the movement of the horse provides a number of benefits such as relaxation, change in muscle tone, passive movement of the joints of the spine and pelvis, laterality, balance … but thanks to their initiative and desire to discover, the initiated on the equestrian art (stop, start, turns …). 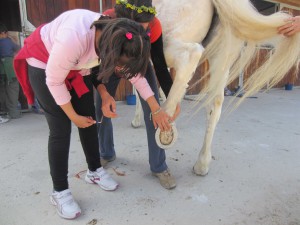 The balance of this activity demonstrates the value of such therapies: as all the attendees have achieved the overall objective, since by the end of the four month course, they moved independently around the equestrian center and had internalized the steps they were to follow from their arrival at the center until they boarded the bus back to school.