The past November 24th, the Foundation for the Promotion of Equestrian Sport held a Merit Recognition Act for people and entities that have excelled in the fields in which the Foundation operates.
​In the field of sport, Mr. Miguel Vila Ulbach was awarded by his gold medal and title of World Champion, obtained in the Equestrian Games held in Germany last August. 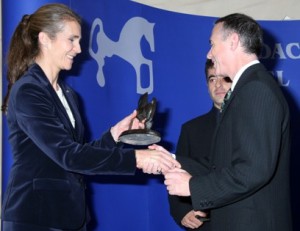 In terms of Professional Training, the award went to Mr. Escolástico Aguilera, full professor of the University of Córdoba, a specialist in equine internal medicine, for work carried out to benefit horse health, particularly in the study of the airways.
In terms of social responsibility, the Foundation for the Promotion of Equestrian Sport awarded Ms. Mercedes Jiménez Horwitz for her continued dedication over the years, first personally and then as President of the Caballo Amigo Foundation, in the work of therapeutic riding. 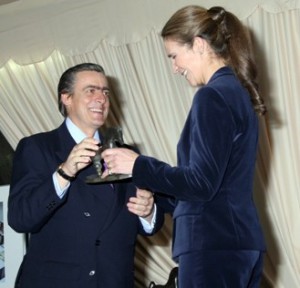 In this same act, the entities SAVINGS BANK OF THE MEDITERRANEAN, ACS FOUNDATION, FUNDOSA, VOLVO CAR SPAIN, ANCADES and the ROYAL SPANISHEQUESTRIAN FEDERATION, received recognition for their support to the activities of the Foundation.
Additionally, in their individual capacity,Mr. Germán López Madrid and Mr. Carlos García Revenga, President and Secretary of the Foundation respectively, received their recognition. 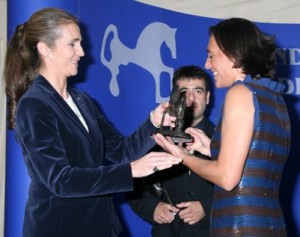 ​The award, a bronze figure inspired by the Numantino horse, symbol of the Foundation, is the work of the Galician artist Cuqui Piñeiro.