Fundación para la Promoción del Deporte Ecuestre has signed a cooperation agreement with PE&CO Association – which conducts its activities in Alcorcón (Madrid) – for a second consecutive year, in order to support their “Familiy Break” program, oriented to people with disabilities or at risk of social exclusion. 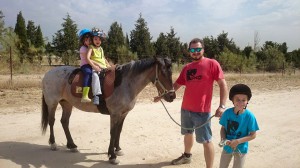 Activities were held during the summer months of 2015, from June 22nd to September 4th, (stopping in August), at the premises of equestrian centre Venta La Rubia in Alcorcón (Madrid). 25 users benefited as a whole.
The program was scheduled weekly, distributing the children in several groups. Nevertheless, some children stayed more than one week, and were in charge of the task of introducing their peers to the activities, increasing the feelings of empathy and cooperation among them. 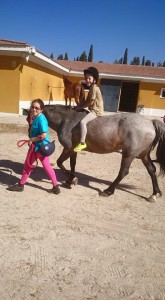 With its involvement, Fundación para la Promoción del Deporte Ecuestre shows once again its care for improving the quality of life not only of people with different disadvantages, but also of those who look after them every day, their families and carers.  Through the support of this program, the Foundation contributes to giving them some of the well-needed rest they deserve, for such an intense and absorbing role they play within their family environments. 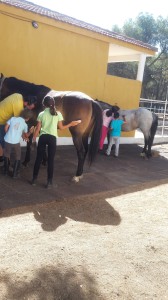