The Foundation for the Promotion of Equestrian Sport donated a series of materials for adapted riding to the Association of Equestrian therapies of Murcia AMTE to support their Outreach Project and Horse Assisted Intervention,  aimed at  visually or hearing impaired children who are members of the ONCE Region of Murcia.
Programmed throughout 2013 are a series of talks, a training programme for ONCE volunteers, outreach workshops for groups of children with visual disabilities and their brothers, and a Parent School affiliated with Cartagena. 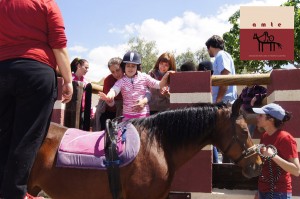 On May 1st the first day of communal living and coming together at the Assisted Intervention with Horses was celebrated, on behalf of of a group of about 22 children and 30 adults.
As of May when the donation of adapted material has been received, preparation will start for three beneficiaries, looking at competing at Para equestrian dressage: one case of hemiplegia, a case of cerebral palsy with optic nerve atrophy and visual impairment and a case of diabetes with retinal detachment and temporary vision loss.
The first event organised was the result of a Social Open day of Para equestrianism took place on the 28th December 2013. 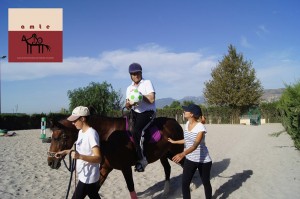 Among the materials provided by the Foundation was a strong and light staircase with two steps easy to carry with two handles.  This little tool has provided great benefits as much for the riders as the seniors with Downs Syndrome,  and those who lack confidence and agility, for example in cases of fibromyalgia. Most important is the relief of the horses when receiving the weight of the user.
Other beneficiaries have been several associations affiliated with FEAPS who collaborated with AMTE by agreement. This is a group of 15 people from the PADISITO Association and a group of six adults with autism spectrum living in the AFAPADE centre, also ONCE members. 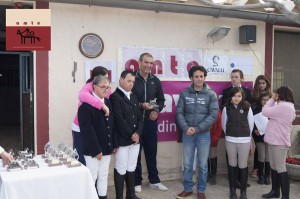 Between the coexistence days,  individual therapy sessions, classes of Adapted/Therapy Equitation and courses organised since May 2013,  200 users from AMTE have benefitted from the donations of new materials from The Foundation of the Promotion of Equestrian Sport.