The past November 23rd, The Foundation for the Promotion of Equestrian Sport celebrated the 2012 Merit Recognition Act for people and entities that have excelled in the fields in which the Foundation operates.
The Gala, which the Foundation annually celebrates, marking the end of the season, welcomed 200 guests who attended the Royal Theater in Madrid. 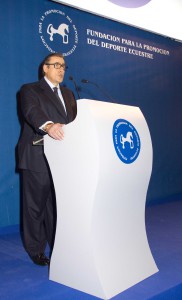 With regard to Professional Training, the Foundation awarded the Foundation of the Royal Andalusian School of Equestrian Art, for its excellence in the training provided at the Jerez site where studies can be pursued in saddlery, assistant at a veterinary clinic, rider, groom etc. The great international reputation that the Jerez School has achieved through its entertainment and its sporting successes at first level international competitions, are the prelude to training projects demanded by today’s society. 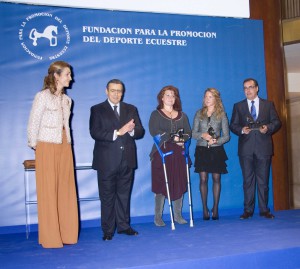 Ms. Diana Marsá Lafarge was the one awarded with the sports merit as she achieved, in the month of August, the gold medal at the University World Championship of Obstacle Jumping held in the German city of Aachen, positioning Spain at the top of the medals.
One of the awards that are the most valued and recognized by the audience with their applause was given to Angelika Trabert in terms of Social Responsibility, for her wonderful story of personal achievement, because despite the difficulties that life has dealt her, she has managed to cope, finding riding the incentive to do so, having won 3 bronze medals, 11 Silver and 1 Gold in different European Championships, World Championships and Paralympic games. 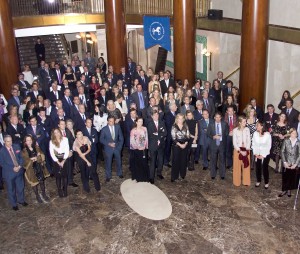