The past November 21st, The Foundation for the Promotion of Equestrian Sport celebrated the 2014 Merit Recognition Act where it has awarded both the individuals and the entities that during the past year have excelled in the fields in which the Foundation operates.
The Gala, which the Foundation annually celebrates, marking the end of all the season, took place at the Royal Theater in Madrid, and welcomed the attendance of 200 guests. 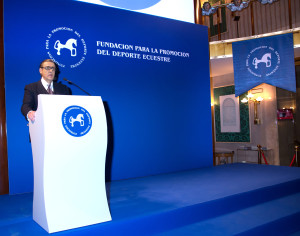 The Clinical Hospital of the School of Veterinary Medicine of the Complutense University of Madrid was awarded for its dedication to training future professionals with post-graduate courses taking place in this center, and in particular, those of physical therapy and equine recovery, held in 2012-2013 and 2013-2014 in collaboration with this Foundation. In its name, Ms. Consuelo Serres Dalmau, Director of the Complutense Clinical Veterinary Hospital, received the award.
In terms of Therapeutic Riding, The Foundation for the Promotion of Equestrian Sport, recognized the Tiovivo Foundation for its work in the insertion of people with disabilities through the equestrian therapies over the past nine years, while counting with the support of our Foundation through various cooperation agreements Luis Cuenca Rodríguez, President and founder of the Tiovivo Foundation, was the one commissioned to collect the award.
Finally, a posthumous award was given as a mention of honor of The Foundation for the Promotion of Equestrian Sport to Mr. Manuel Malta da Costa, for his collaboration with the Foundation since its inception in the design and elaboration of the tests for Technique and Style and in the numerous clinics aimed at young riders, who on behalf of the Foundation has provided throughout Spain. His brother, Felipe Malta da Costa, was the one who picked up this Honorable Mention. 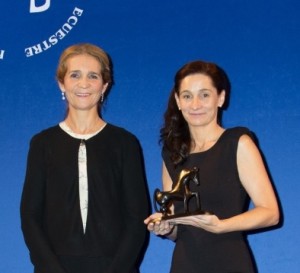 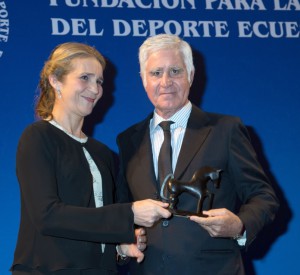