What are they about?

What are the Equine-Assisted Interventions?

Based on the terminology used in the sector, the Equine-Assisted Interventions, Equine or Equestrian Therapies, are all those activities aimed at the rehabilitation or assistance of people with functional diversity and/or in a situation of vulnerability in which the horse and the environment in which the activity takes place become the facilitating means of the therapy to achieve the objectives proposed for each user or group.

The final objective of therapies is to improve the quality of life of the beneficiaries, favouring their autonomy and social integration.

A bit of History

In current bibliographical references we find that the therapeutic accompaniment of horses has been used since before Christ. Specifically, the Greeks advised horseback riding as a measure to improve the self-esteem of people with incurable diseases.

However, more precisely, reference can be made to Hippocrates (458-377 BC) who in one of his book recommended horse riding to «regenerate health and preserve the human body of many ailments , especially the treatment of insomnia.».  In his account he also stated that riding in the open air improves the tone of the muscles.

But other Greek medical professionals such as Asclepiades of Prussia (124-40 B.C.) saw it as positive for sufferers of gout, epilepsy, paralysis, apoplexy, etc.; and Claudius Galen (129-199), as physician to the Emperor Marcus Aurelius, also recommended its practice to be more agile and quicker.

Much later we find references by Merkurialis (1569) in his work The Art of Gymnastics who mentions that riding not only exercises the body, but also the senses; or the importance of the work of the German physician Samuel J. Quelmaz (1697-1758) with his work on health through riding, in which for the first time mention is made of the three-dimensional movement of the horse’s back.

Even Friedrich Hoffman, German chemist and physician (1660-1742), in one of his books, defines the horse´s walk as the healthiest gait; or Denis Diderot, French philosopher and writer (1713-1784), in his encyclopaedia mentioned that horse riding stimulated the movement of the muscles, influencing the whole body to maintain good health and to find it.

Undoubtedly, there are countless historical references to the benefits of horse riding, but in the 20th century, several facts are those that mark its current consideration:

Liz Hartel, Danish dressage champion, suffered polio in 1943, which left her in a wheelchair. After hard work, she managed to get back on a horse and won a silver medal at the 1952 Olympic Games in Helsinki. Her physiotherapist, the Norwegian Elisabeth Bodiker, surprised by the result, decided to have young people with disabilities ride horses in her clinic, and with the excellent results she achieved, the Norwegian authorities opened an Equestrian Centre for children with disabilities in 1953.

In France, the physiotherapist Hubert Lallery, in 1962, was the first to study the use of the horse to re-educate in the treatment of illnesses, and this led him to found the first Reeducation par L’ Equitation (A.N.D.R.E.).

Later, together with Renée de Lubersac, also an analyst of the movement of the horse and its benefits, he created in 1970 the national association HANDI- CHEVAL with the aim of developing the practice of equestrian activities for people with functional diversity.

The work of the latter author was the basis for the founding in 1971 of the Association ASERTAC and then in 1986, the Federation Nationale de Therapie Avec le Cheval (FENTAC).

Since then, specialised centres and professionals have begun to proliferate.

What types of Equine-Assisted Interventions are there and what are their differences?

Equestrian activities aimed at people with disabilities include activities for therapeutic, sporting and leisure purposes.

At an international level, when the aims of an equestrian activity aimed at people with disabilities are within the care and rehabilitation programmes of the person, we speak of HYPOTHERAPY, REHABILITATION THROUGH HORSE RIDING, THERAPEUTIC RIDING, EQUESTRIAN THERAPY, EQUINE-ASSISTED INTERVENTIONS.

When the person with a disability practices horse riding as a sport or as a leisure and free time activity without having a programmed therapeutic intervention, we talk about PARA-EQUESTRIAN DISCIPLINE, ADAPTIVE RIDING or ADAPTED EQUESTRIAN SPORT, or PARA-DRESSAGE.

Within the activities for sporting purposes, some of them can be found such as the following:

And within the therapeutic activities, two large groups can be distinguished depending on the beneficiaries and objectives.

HYPOTHERAPY: Equestrian activities with therapeutic purposes aimed at people with severe disabilities, in which the rider cannot perform actions on the horse and the activity is directed by a therapist.

In short, any physical or mental impairment that prevents the rider from working independently on horseback and, therefore, the performance of direct actions by the patient in the direction, handling and care of the animal. The person with a disability cannot lead the horse, nor communicate with it either due to a physical or mental impairment, and does not participate actively (passive therapy).

In Germany and other central European countries they speak of HYPOTHERAPY to refer to physiotherapy on horseback, excluding from this terminology people with psychiatric, behavioural and conduct disorders that also impede autonomy and communication with the animal.

EQUINOTHERAPY: Equine-Assisted Therapy. The beneficiaries are not so affected that they cannot actively participate in the equestrian activity and can exercise actions on the horse, understanding that their actions create a response in the horse. 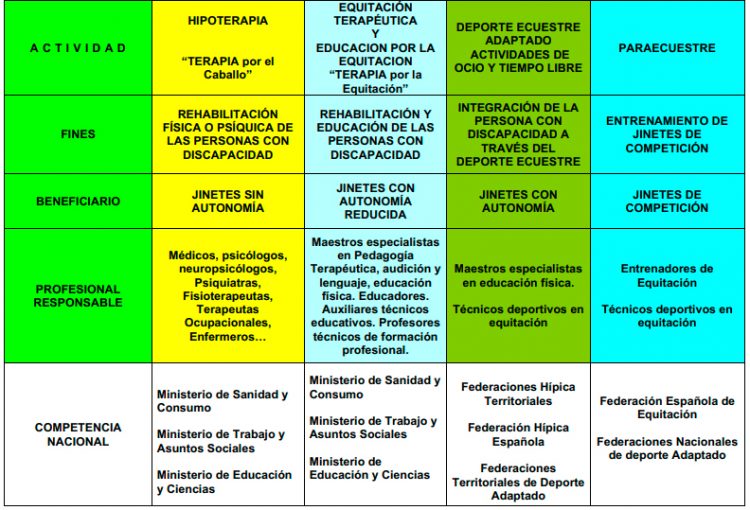