The past November 27th, The Foundation for the Promotion of Equestrian Sport celebrated the 2009 Merit Recognition Act for people and entities that have excelled in the fields in which the Foundation operates.
​The Gala that the Foundation holds annually, marking the end of the season, welcomed more than 200 guests in the Equestrian Tent of the Campo Villa Club in Madrid.

In the field of sport, the work of Ms. María Álvarez Pontón was awarded, presenting her with the sporting merit award for her dedication to the world of endurance riding, being World Champion in 2008 and holder of the Gold Medal and European Champion Title won last September in Assisi (Italy). 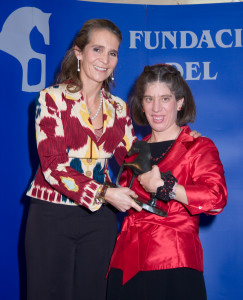 In terms of social responsibility, the Foundation awarded the rider Ms. Sonia Villalba van Dijk for their daily improvement since she started riding in 1990, obtaining brilliant sporting achievements among which we must mention her diploma obtained at the Paralympic Games in 2000 and her qualification for the next World Championship to be held in 2010 in Kentucky.
The work exerted within the veterinary scientific world, particularly in the field of animal nutrition, was more than enough reason to reward, in terms of Professional Training, the work of Mr. Arno Linder, linked to the Foundation since 2007, collaborating in our program giving lectures at different universities of the country and in the celebration of the ENUTRACO Congress, on September 25th and 28th last, in the City of Madrid. 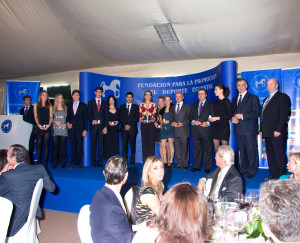 The Foundation for the Promotion of Equestrian Sport also wanted to recognize thesports results of the teams of the Royal Spanish Equestrian Federation throughout this season, specifically the Trial team, Obstacle Jumping by Young Riders team and the Obstacle Jumping by Adults team for by the classifications obtained and the sports merits achieved during this year, giving everyone the silver badge of the Foundation.