The past November 22nd, The Foundation for the Promotion of Equestrian Sport celebrated the 2013 Merit Recognition Act for people and entities that, during the past year, have excelled in the fields in which the Foundation operates.

The Gala, which the Foundation annually celebrates, marking the end of the season, took place at the Royal Theater in Madrid, and welcomed the attendance of 200 guests.

Mr. Agustín Fernández Hidalgo de Morillo was awarded the Sports Merit for his dedication to the discipline of TREC in recent years, in which he has participated in various European Championships and World Championships and, in particular, for his participation in the last European Championship held last September in the Belgian town of Vielsalm, where he earned the individual gold medal for Spain, proclaimed champion of Europe in this discipline.

Regarding disability, recognition has fallen on the Royal Trust for the Handicapped fortheir work on the integration of people with disabilities in the society today, for the collaboration with different programs of equestrian therapies and, in particular, by the agreement reached with this Foundation by which different therapeutic riding programs will be developed over the coming years.

In the area of Professional Training, The Foundation for the Promotion of Equestrian Sport awarded Mr.  Álvaro Domecq Romero for a lifetime linked to the world of horses, first as a mounted bullfighter, then as a promoter of his great work, the Royal Andalusian School of Equestrian Art, for his excellence in the training of professionals and finally as enthusiastic of the horse of pure Spanish breed, elevating it to the top of its expression. In short, for his dedication and work in the equestrian art, being a role model for future generations. 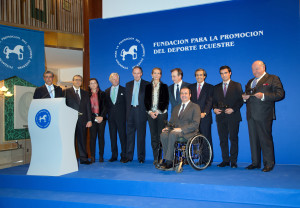 There were words of appreciation from H.R.H. Infanta Elena, accompanied by the President of the Foundation, Mr. Germán López Madrid, and the Director General, Mr. Javier Valiente Romero. 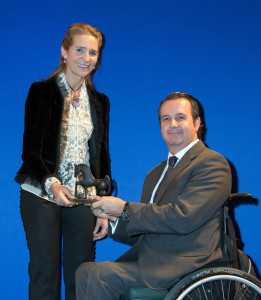